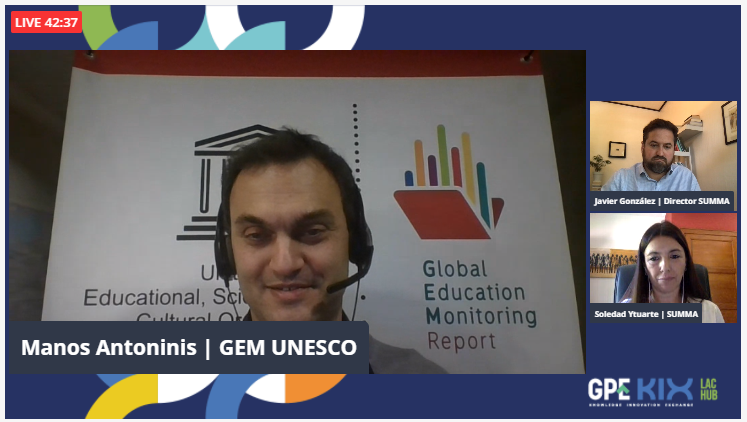 This event highlight was written by KIX LAC hub and edited by Tiffany Barnes-Huggins.

The KIX regional hub for Latin America and the Caribbean (KIX LAC hub) held the second edition of “KIX Conversations”, a webinar series hosted by the hub, on December 16, 2020.The webinar focused  inclusion, youth, COVID-19, teacher training, bilingualism and monitoring in the education sector. Manos Antoninis, director of the Global Education Monitoring Report and Javier González, Director of SUMMA, led the conversation. Together they also discussed the GEM 2020 Report for Latin America and the Caribbean, a work developed by SUMMA, GEM Report and OREALC-UNESCO. In the following sections, we provided a recap of the highlights of these discussions.

Antoninis pointed out that in the Caribbean there is still disaggregated education that still faces great inequalities and addresses difficult issues of nationality, religion, sexual orientation and gender identity, but even so, the region has made great progress.

During the conversation, Gonzalez asserted that, "when we talk about inclusion we talk about many groups, but youth deprived of liberty is one of the most excluded in society. Churchill used to say that the degree of civilization of a society could be measured by the way they treated their prisoners, in that sense, this is a difficult population because they are invisible. In many cases they are outside the cities and we do not see them. For example, Honduras is one of the countries with the highest levels of juvenile crime where only 6% of the youth in prison complete high school”.

At the end of the meeting, the speakers discussed the main consequences that COVID-19 has had on education systems in the region. According to the director of the GEM Report, Manos Antoninis, the lack of access to information and structures as one of the main consequences: "countries in the region have made an incredible effort to continue educating remotely, but many already had weaknesses in terms of internet connectivity or lack of adequate devices at home before the crisis and with the pandemic thousands of students were left behind."

To find out more about this event, you can watch the full recording which is available on Facebook http://bit.ly/3gRDg24  and on YouTube: https://bit.ly/3gS3Kk6.